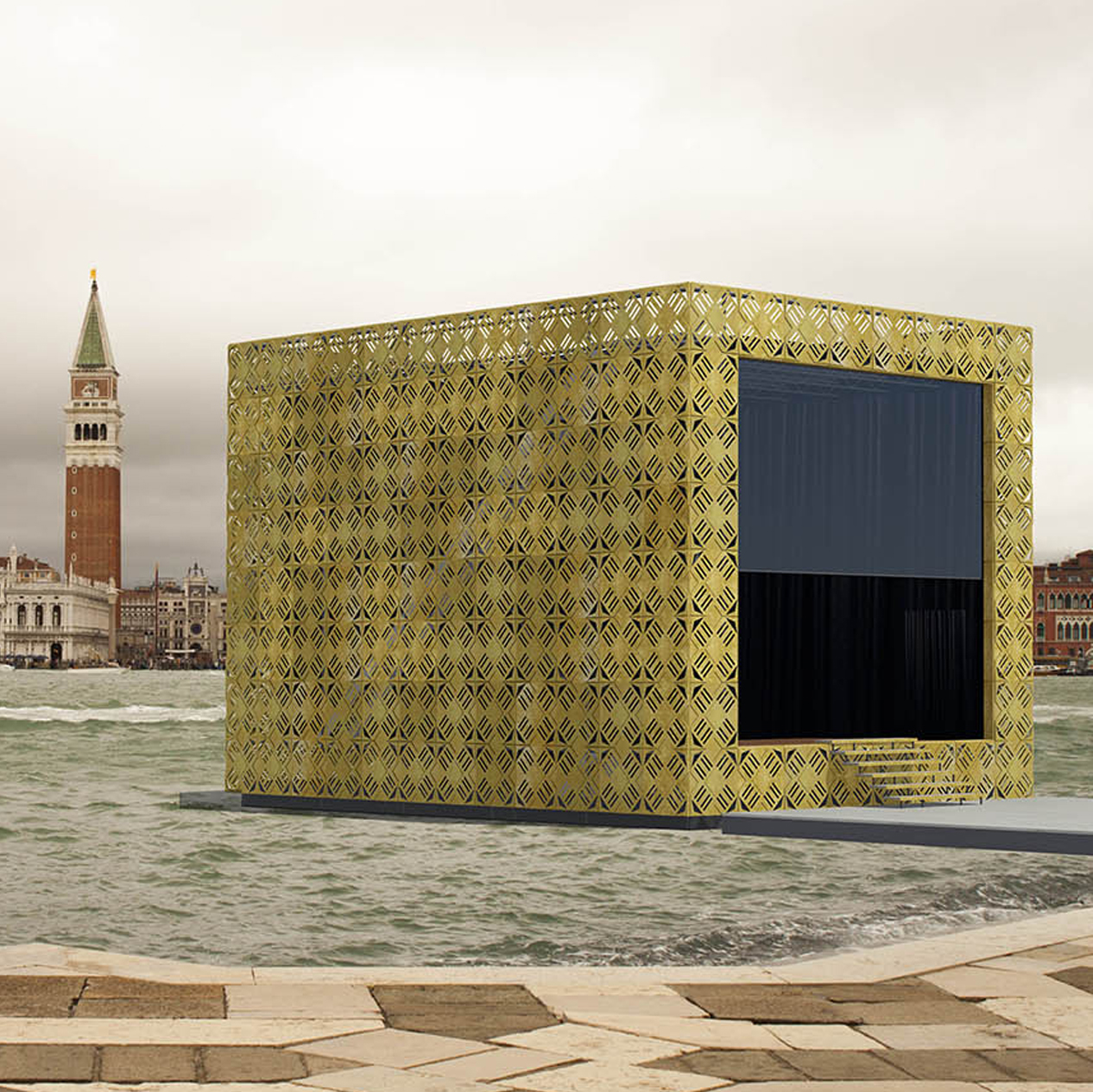 The island San Giorgio Maggiore is located on the Canale della Giudecca in Venice, opposite the Piazza San Marco. The Canale della Giudecca here becomes a very crowded intersection of marine vessels. On San Giorgio Maggiore is located the late 16th century church of the same name, designed by Andrea Palladio. During an international workshop in Venice, the first exercise was to analyze the urban situation of the public space in front of the church. It quickly became quite obvious that the buildings on the island and especially the campanile are important focal points of the entire surrounding area, stretching from Giudecca to the Giardini Biennale. These focal points operate in a single system, effectively creating the biggest open space in Venice. We tried to argue and emphasize the existence and importance of this single coherent space as well as the enfilade that exists within it. That enfilade became the starting point for our approach to the second task, the design of a floating theater. The following text will show our interpretation and also try to convey the argument about the urban situation of San Giorgio Maggiore.

Currently, Palladio’s building is not in use as a church. When it was used as such, locals would use their gondolas to travel to the island and moor directly in front of the church. The luxury pavement that extends perpendicularly from Palladio’s façade acts as a carpet for church goers. It continues the interior space of the church outwards, penetrating the façade that starts to act more as an architectural screen. The pavement in that way asserts the church as the most important building on the square and simultaneously instates a non-existent symmetry. This pavement indicates two urban situations: that of a continuous open space, as well as that of a symmetrical axis, an axis that holds a linear sequence of spaces.

The square that lies in front of the church on San Giorgio Maggiore has walls on two sides, the East and South. On the previous page the definition of the East wall has already been reduced to that of a screen, a soft separating element, instead of a hard border of a space. The inside of the church more or less continues outside after penetrating the architectural screen. That way, the square and the interior of the church become part of one urban system, one flowing space if you will.

North and West however are bound by a body of water. In the historical situation, church-goers would approach the church in their gondolas on the water to finally moor at the edge of the luxury pavement. In that sense, the experience of entering the square is in fact an extension of the approach of the church on the water. That way, the water also becomes part of the urban situation, if not as a passable plane, then as a vestibule, a preamble to the actual entering of the church itself.

Venice as the boundary

Standing on the square in front of San Giorgio Maggiore, one can really experience this flowing space, the continuity between the paved square and the body of water i.e. the Canale della Giudecca. The outer perimeter of this space could be defined as the two walls of the square on the island, opposing the long row of buildings that constitute the skyline of Venice. That way, the open space becomes an urban square once more, bound by a clear boundary of solid structures. The boundary in this case is coherent in the sense that is contains in its margin the three most important focal points of the area: the Campanile of San Marco square, the cupula of Santa Maria della Salute on Punta della Dogana, and the façade designed by Palladio on San Giorgio Maggiore.

The linear axis briefly mentioned before, marked by the organization of the church as well as the symmetry of the square’s luxury pavement, acts as an enfilade. An enfilade is commonly defined as a sequence of places. The enfilade in this case consists of the church’s choirs, the altar, the collumn gallery. Then it penetrates Palladio’s screen and continues in the pavement and waterborne vestibule, to finally end at the boundary of the outdoor space, namely the skyline and the cupula of the Santa Maria della Salute.

Continuing on the enfilade consisting of roughly seven spaces that we discovered in Venice, the spoken theater is inserted as an eighth space in that enfilade. This raised certain questions. What is the quality of the existing enfilade and how will the insertion of a new space affect that quality? How will the new space relate to the spaces coming before and after? What happens to the clear linear organization of the enfilade when a new space is inserted? In addition to these questions, the relation between the summer school and Rossi’s Teatro del Mundo outlined a goal for us, to use historical and contextual references to rigidly embed our design in its urban situation.

In an enfilade in which each space holds a specific function, a new insertion should have a clearly defined function as well. In the case of the spoken theater, the design has the shape of an extruded square with open ends. When standing inside the theater, the square shape frames either the view of the Palladio screen or the view towards Venice. These views can then function as backdrop for the spoken theater. Gaining more flexibility, the design allows the performer to move around the theater – there is no clear separation between stage and audience. That way, the performer can move towards the opposite side of the theater to change his backdrop. Also, this setup diminishes the hierarchy that exists between performer and audience as the latter is also standing. Having the audience at eye-height allows for more personal interactions and easy breaches of the fourth wall.

On an urban scale, the theater functions as a scaled down mirror image of Palladio’s screen and the adjoining luxury pavement on the square. In front of the theater lies a small floating platform that serves as a vestibule or entrance bay. This platform has the same dimensions as the theater’s façade. In the corner between platform and façade are stairs that visitors use to enter the theater and simultaneously serve as architectural hinge between the two elements. The consequence is that the square on San Giorgio Maggiore becomes more clearly demarcated and also contains a coherent set of architectural elements, reflecting a scaled down version of the vast open space that is also bound by three coherent architectural focal points. Conversely, from the more or less observing surrounding areas of San Marco square and Punta della Dogana, the theater serves as a small beacon of interest, a shiny yellow volume right in front of Palladio’s façade, perhaps a parasite eating away at its attention-drawing quality.

The entire theater is clad in a pattern that consists of brass panels of one square meter. Architectural motifs from the two most prominent periods in Venice’s architecture served as starting points: the façades of Gothic pallazzos and the façades of Renaissance churches. These two periods seemed appropriate for the position of the spoken theater as, in this position, it quite literally became the intermediate between the two opposing ends of the enfilade: the renaissance Palladio church and the Gothic pallazzos in Venice. With this pattern the theater tries to reconcile two architectural paradigms that are commonly declared opposite.

For the most part this exercise involved an interpretation of the brief, which was to combine seven of the 14 theaters into one cultural island. Doing so, dislocating the designs to move them into one location would be inevitable. Accordingly, the conceptual ideas of all theaters would be rendered useless, as they were specifically devised for their original locations. This was a consequence of the exercise’s relation to Rossi’s design for Teatro del Mundo. In addition, the design of each theater was made independently from the others. Concluding, this exercise would orphan and dislocate designs to bring them together in a collage-like unity, effectively creating a Cadavre Exquis, an Exquisite Corps. An Exquisite Corps is ‘a linking of two realities that by all appearances have nothing to link them, in a setting that by all appearances does not fit them to use the definition of Max Ernst. The Exquisite Corps either becomes fantastic or monstrous.

Consequently, the goal of this exercise was to examine how to deal with this situation, how to use the separate designs to aim at a fantastic result? Can we devise a systematic approach to this problem – to consider all designs equal and select seven based on certain criteria that in our opinion would be effective in bringing together this fantastic Exquisite Corps?

An Exquisite Corps seems to be the opposite of the urban fabric of Venice, where everything is bordering on coherent, where each building was designed taking the context into account. The Giardini Biennale comes closer to an exquisite corps as this area contains pavilions designed by many architects placed together in one system of axes and spaces. Interestingly, Both the Giardini and historic Venice result in an intricate network of nodes and connectors. The nodes being small squares or open spaces where one is confronted with three or more buildings, and the connectors the narrow passageways that connected said nodes. The quality of the area is not so much caused by the buildings themselves (the matter), but more by the spaces in between them (the anti-matter). Can we achieve this kind of urban quality with our own Exquisite Corps?

In our aim to gain a specific urban quality on the cultural island, we viewed each theater in an abstracted footprint and elevation to compare their individual urban qualities. The seven designs were combined in such a way that in any place the visitor would be confronted with three or four of the buildings, combined in different ways. In between the buildings space is left open to show what is behind. In section, the urban implications of the different designs result in interesting public spaces, contracting and expanding at the corners and gravitational points on the island.

The design process that the students from TU Dortmund and I developed during this summer school proved interesting though somewhat problematic over the course of time. It really showed the differences between the education in Dortmund and the education we receive in Eindhoven, where we are not so much interested in the final product but more in the way that the design has been made. In Dortmund, I suppose, the emphasis lies more on designing a visually pleasing project. As one of my dear architecture friends once proclaimed, design is research. And inevitably, the outcome of research is uncertain. Of course one can define a clear hypthesis, but to work directly towards this first idea seems but a primal instinct. As one may encounter while developing designing skills, design is a cyclical process. Two steps forward and one step back. Intuitively make choices and afterwards reflect on what the motivations for these choices were.

One interesting aspect of this approach is that the outcome is always uncertain. In the end the method became the product. The actual product is not as interesting as the way it was compiled. This would more closely approach a scientific method of designing than when an architect is working towards a certain design. That became the only problem that we encountered during our collaboration. As we in Eindhoven try to work in a cyclical and more or less scientific way, we accept the unpredictability of a design. Melina, stemming from a German education, and also the German tutors eventually rejected the outcome of the method as it was not far from appearing randomized, not orthogonal or symmetrical. In the end the product did not answer to the method, but that did not matter as the method was deemed more important.