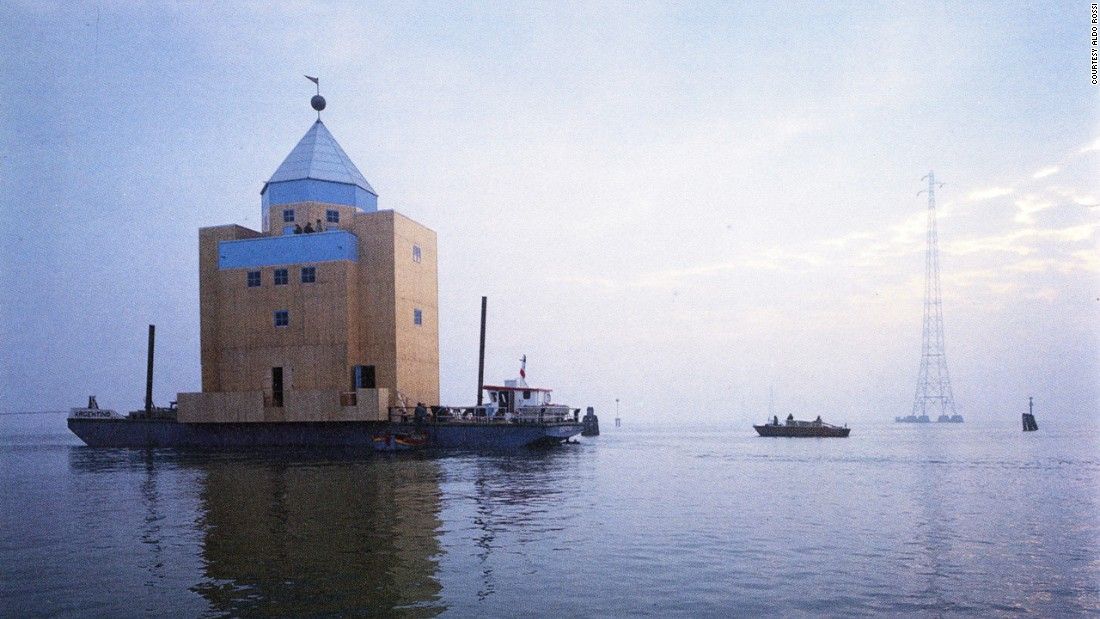 The goal of this essay is to point out the international significance that the Eindhoven faculty of Architecture had during the period 1970-1990, specifically the parallels and intersections between the Eindhoven School and the Venetian School, as well as their common denominator of the postmodern attitude. The clearest illustration of this obscured relation between Eindhoven and Venice is the fact that Jo Coenen, a postmodern architect at the time, was asked to design the Dutch pavilion for the first Venice Architecture Biennale in 1980, curated by Aldo Rossi. This article was first published in December 2017 as part of the proceedings of the International workshop Ein Schiff aus Stein in Venice, September 12-22, 2017.

The Eindhoven Faculty of Architecture was founded in 1967 by John Habraken as a response to the dogmatic Modernist approach to architecture in Delft.[1] This founding was shortly followed by the May 1968 civil unrest in Paris. Civil unrest, eventually leading to a student revolution. In response to the undemocratic and hierarchical situation on universities, students began protests against capitalism, consumerism, American imperialism and traditional institutions, values and order. This activism spread throughout Europe and landed among other places in Eindhoven and in Venice. Where in e.g. Tilburg the student revolution preceded a Marxist doctrine that reigned on the university, in Eindhoven the revolution left a great vacuum in the curriculum, leading to an intense freedom to be exploited by students. Students could receive credits for an extremely wide range of activities. Under influence of architecture historians Geert Bekaert and Gerard van Zeijl, architecture groupie[2] Hans Tupker, architects Wim Quist and Dick Apon, students could develop a critical position towards the history and current state of the profession, as well as explore divergent ways of designing. This period of educational ambiguity and freedom arguably starts in 1970 with the entry of Geert Bekaert as teacher of architecture history and theory, and ends in 1990, with the seminar How modern is Dutch Architecture? organized by Rem Koolhaas in Delft. The students that graduated during this twenty-year period were grouped together first as the Eindhoven Eclectics by Peter Buchanan in 1985[3], and later as the Eindhoven School. Between 1988 and 1993, an exhibition on the Eindhoven School travels from Eindhoven to Antwerp, Groningen and Zürich.

“Look at a film like “The Good, The Bad, and the Ugly” – a sort of caricature of the American Dream, but free of ideology, more grotesque and extreme than the American westerns of John Huston or Ford. In the same way, the Dutch version of the “Architectural Autonomy” of the Venetian School was an extreme and cynical caricature.” Bart Lootsma, former student of architecture in Eindhoven, confirms: “Absolutely! Absolutely! We were much more cynical than the Italians.” [4]

Nevertheless, these Italians had significant impact on Architecture students in Eindhoven. Students like Gert-Jan Willemse, architecture student in Eindhoven until 1978, reframed their thoughts and started to lead a life of architecture. Together with his friend Johan Kappetein, Willemse was in search of an autonomous architecture after he graduated. Disillusioned and disoriented by architecture practice, he became increasingly isolated in his apartment in Rotterdam, painstakingly drawing perspectives of abstract architectural volumes. Willemse bundled these drawings together with German poetry in ‘books’ that he continued to ship to Geert Bekaert. His last book was titled Finale (1987).

“The end was approaching. A few close friends received a visit; some of them receive a copy of an architectural tractate that, only in retrospect, proved to be a final testament. The heaviness of a tombstone. The lightness of a banner. The curtain had fallen.”[5]

Other students handled Tafuri’s theories with more distance and started to look for a way out. History was considered in its entirety as a library full of interesting ideas, no matter the period, free to use whenever and wherever. Still, the Eindhoven School was able to go past the stereotype of postmodernism, the arbitraryiness, superficiality and densification or historical symbols. Jo Coenen started studying architecture in Eindhoven in 1967 and developed a postmodern design language. Bekaert and Van Zeijl had Jo Coenen present his graduation project in 1975 during a seminar titled Architecture, Inner City, Government. Many famous architects were present at this seminar, such as Dennis Sharp, Ricardo Bofill, bOb van Reeth, Fredric Jameson, Jaap Bakema, Maurice Culot and Charles Jencks. In the first edition of his book The Language of Postmodern Architecture, Charles Jencks notes that this seminar was the first time he uses the term Postmodernism[6]. In 1980, Jo Coenen was asked to design the Dutch pavilion for the first Venice Architecture Biennale. In 1992, the existence of postmodernism in the Netherlands and the importance of the Eindhoven School were both acknowledged by letting Jo Coenen design the Netherlands Architecture institute. That choice also illustrates the rivalry between two architectural developments: the Eindhoven School with its NAi, as opposed to Rem Koolhaas with his Kunsthal. The two buildings are quite literally at odds, located at the two opposing ends of the Museumpark in Rotterdam.

In 1990 at a seminar in Delft titled “How modern is Dutch architecture?”, Rem Koolhaas observes that architects in the Netherlands are still working with the same paradigm that was already 75 years old, and as result operate in a self-inflicted exile from international discourse. Hans van Dijk argues that the root of the problem is ‘onderwijsmodernisme’, where teachers from the Modernist period look back with great emotional adherence to the work of such architects as Jan Duiker and Mies van der Rohe:

Students are taught that these great modern architects had the key to truly modern architecture, and that key was somehow embedded within their vision of the modern world. That vision, however, had been significantly disproven by postmodernists such as Charles Jencks[8]. The idea that architecture could shape man turned out to be false and, concurrently, architecture was in need of a new paradigm or even legitimation. At the seminar, Joost Meuwissen briefly mentions that these are questions that students and teachers at Delft should ask themselves, as the above stated situation was not the case in Eindhoven. In Eindhoven, perhaps due to a lack of famous modern architects as teachers, but more importantly due to the presence of people such as Geert Bekaert, Peter Schmidt, Hans Tupker, John Habraken and others, Eindhoven’s architecture students were not limited by an obsolete Modernist paradigm. Gerard van Zeijl argues:

“These students seem to hold different views towards architecture than the older generation, that more or less continues the modern architecture tradition. Because this architecture barely shows any development, and since years even drifted toward a pragmatism, it can be viewed as a ‘school’ in which the lessons have denigrated into a doctrine. The younger generation does not comply with this school, that led to connection, if not modesty. They came into resistance and the breach with the older generation has become a fact.”[9]