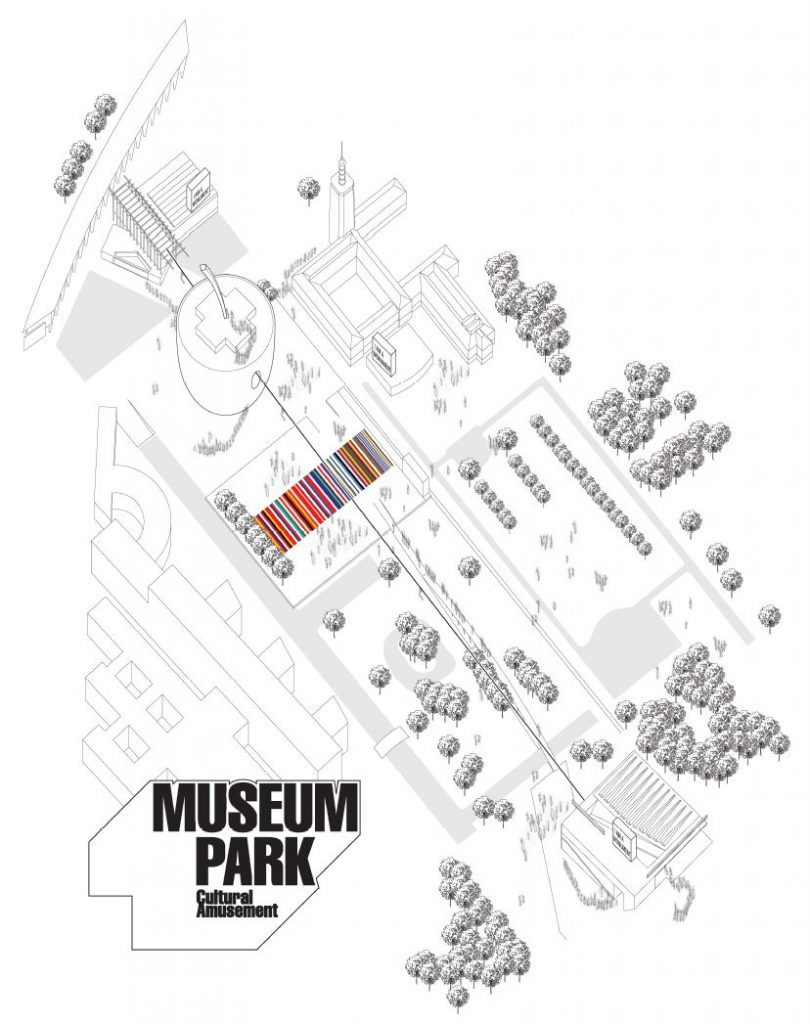 As a critical response to the collapse of the NAi on 1 January 2013 and the subsequent construction of MVRDV’s eyecatchy Depot in the Rotterdam Museumpark, The Collapse envisions recreating the entire area as a themepark, employing the existing museums as cultural attractions. The most important design idea is the conception of a zipline starting at the top of the ruined NAi, penetrating the shiny volume of the Depot by means of a tunnel of art, and ending at Koolhaas’ Kunsthal. As such, the architectural tension between the Kunsthal and its stillborn twin the NAi is recreated literally, and visitors are catered to a high-speed experience of the Boijmans collection.

“Did you see it?”
“See what?”
“The NAi.”
“What about it?”
“It collapsed last night.”
“What do you mean collapsed – the canopy?”
“No the entire building just collapsed; the study center crashed down on top of the entrance and restaurant. Nothing but the encapsulated archives standing firm.”
“No way!”
“Well evidently it did, everyone saw the ruins this morning.”
“Did nobody hear it happen though?”
“I don’t think anybody was there to listen to it.”

The linear tension in the Museumpark designed by OMA between their proposed Kunsthal and Architecture Institute never came to full fruition as the latter project was never realized. What was constructed was Jo Coenen’s rigorously different design, looming over the berch-planted vestibule of the park. What remains is an interplay of more delicate tensions between various architectural landmarks. Between the white Modernist villas and the brick traditionalist Boijmans van Beuningen. Between the robust prefabricated Erasmus Medical Center and the frail sculpture garden. Between the Eindhoven School NAi and the proto-Superdutch Kunsthal. The Museumpark, amid this architectural tug of war, is stretched on all sides and balances its permanent state of stress. A remnant of the initially proposed linear tension, the park is bisected by a lingering bridge, an umbilical cord between OMA’s Kunsthal and their miscarried Architecture Institute.

This delicate situation will be disrupted by the insertion of a new architectural gravitational point, MVRDV’s shiny Depot, in which the entire Boijmans collection will be exhibited. Where all neighboring architectural interests invest heavily in their landmark forms to become eyecatchers (Boijmans’ tower, NAi’s floating library, Kunsthal’s billboard), the Depot takes this to the extreme in order to become the eyecatchiest of them all. It feeds off the collapse of the NAi and uses the energy or climate that caused this collapse [devaluation of elite culture] to gain a position in the center of attention, to become the focal point among focal points. The Depot is a priori at the top of the park’s hierarchy. It needs this position to open the Boijmans collection to the biggest audience possible, in an attempt to popularize or de-elitize their own elite culture, broadening the definition of the Museumpark to that of an amusement park, an amusement park for culture.

Four strategic interventions to deal with the characteristics of this new situation.